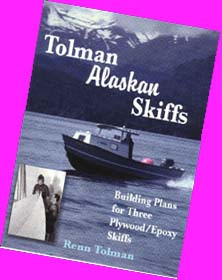 Tolman skiffs are dory-style skiffs with semi-vee bottoms made of plywood/epoxy/fiberglass (sometimes called stitch-and-glue or composite construction). I have built over sixty since 1986 for sport and commercial use, and many others have been built by amateurs and professionals in the US, Canada, New Zealand, Europe, and elsewhere. I retired from building skiffs commercially in 2000, and I now spend much of my summers using mine here in Alaska.

I have designed three models, the "Standard," the "Widebody," and the "Jumbo." The Standard and the Widebody are identical in profile, but the Widebody has a 3-inch "chine flat" between the sides and bottom, like most fiberglass boats (ten million fiberglass boats can't be wrong). The Jumbo is a larger skiff in every dimension, has a 4-inch chine flat, and has a deeper vee bottom. The Jumbo is designed specifically to use the new four-stroke 115 to 150 horsepower engines. 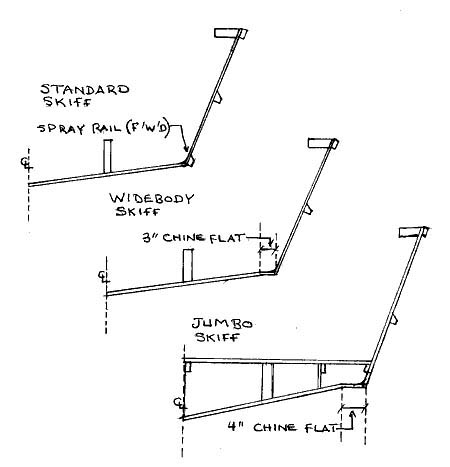 Popular options include a recessed bow deck/locker, a console, a self-bailing deck, a cabin with sitting headroom and two bunks, and a short or long hardtop protecting the helm (in cabin models). The Jumbo can be built with any of the above options, with the Kachemak Bay-style cabin shown above or with a full cabin such as is found on the popular fiberglass C-Dory.

Build a Better Boat Than You Can Buy!

Tolman Alaskan Skiffs are thoroughly modern vee bottom, stitch-and-glue plywood boats that have dories in their ancestry. They are ocean-capable, ranging in size from 18 to 24 feet and powered by outboard engines from 40 to 150 horsepower. They can be built as simple open boats or full cabin cruisers, and anything in between. Tolman skiffs are ideal for sport fishing, beach camping and general recreation.

Quote from inside front cover:

"In Alaska, the word 'skiff' calls to mind an open, outboard-powered boat of wood or aluminum, which is seaworthy, simple to build and cheap to run. Starting in 1973 Renn Tolman began a quest to build the perfect plywood skiff. The first improvement was then-new epoxy construction. Then in 1980 Renn substituted quick-to-build bulkhead-and-stringer construction for traditional ribbed framing, which eliminated the need for expensive 'clear' lumber and simplified the building process. In 1986 he replaced the flat bottom common to most skiffs with an easy riding modified vee. To form the complex bottom shape he adopted stitch-and-glue construction. Once the construction process was perfected, Renn brought out two larger models, reflecting the need for skiffs large enough to have cabins and to handle the new, heavier four-stroke engines.

Here are plans and instructions for building all three of the now world famous Tolman skiffs. Building a Tolman skiff is a project suited to the abilities of the average amateur wood worker. As Renn says, 'Here's a boat you can build with common tools, common skill, and common materials.'"

This book contains very detailed plans for how to build all three of my skiff hulls and the information necessary for adding many options such as decks, storage lockers, steering consoles, and a variety of cabins. The book is 8 1/2 x 11 inches in size and has 250 pages. There are 175 drawings and over 100 photos.

For questions about the book, email kamishak.publishing@gmail.com.

For questions about the skiffs, we highly recommend the Tolman Skiff builders discussion forum. There's an extensive body of accumulated knowledge and many current and past Tolman builders eager to answer your questions. You can sign up at http://fishyfish.com/

Renn Tolman was born February 23, 1934, in Keene, New Hampshire. The Tolmans ran a small four season resort in Nelson, NH, converted from the family farm. Growing up there, Renn developed a lifelong love of hunting, fishing and music; and a great curiosity and interest in the world.

He left Tolman Pond for prep school at Vermont Academy but flopped in his first attempt at college. After a three-year stint in the Army as an intelligence unit radio operator, he returned to graduate from the University of New Hampshire in 1959 with a B.A. in History. He taught in a private school, did graduate work briefly at Harvard, and then moved to the West in 1963. He was a tutor at a dude ranch, a hard rock miner, a carpenter, and became a pioneer ski patrolman at Aspen, CO and Jackson Hole, WY.

He moved to Alaska in 1970, settling in Homer and finding work as a carpenter before moving into boatbuilding. Renn was well-known in Alaska coastal communities for designing and building the Tolman Skiff. His two do-it-yourself books sold thousands of copies and today, Tolman skiffs can be found across the world. An old-school outdoorsman, Renn traveled far across open water on hunting and fishing trips. At his death he had just completed a new design, the Tolman Trawler.

As a flute and pennywhistle player in local bands and a step-dance teacher, Renn played a central role in Homer's thriving contra dance scene, providing an authentic link to the New England and Cape Breton traditions he treasured. Every New Year's Eve, his boat shop was thronged for a community dance, sometimes featuring ringer musicians flown in by Renn. He published The Nelson Music Collection, an historic New England contra dance tunebook accompanied by a CD and musical biography of his father, Newt, a noted flute player. Renn also recorded his own CD, Roughly Cape Breton, released in late 2014. For more information or to purchase a copy of Roughly Cape Breton or The Nelson Music Collection, email Kamishak.Publishing@gmail.com.

Diagnosed with colon cancer in 2008 and given a poor prognosis, Renn continued to live an active life, hunting and fishing, playing flute, traveling regularly to New Hampshire to visit his girlfriend, skiing each winter in Idaho and Wyoming, and providing vigorous step-dancing demonstrations at his New Year's dances. Renn passed away peacefully in his tiny beachfront cabin on the afternoon of Saturday, July 5, 2014. He was 80.